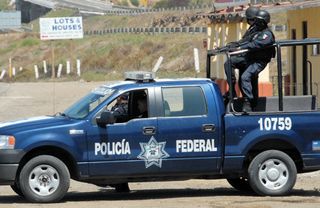 This alert doesn't suprise me...  I took the above photo a few months ago while with a Carnival Cruise shore excurson in Ensenada Mexico.  We were the only people in the area, they arrived just after we did and watched over us during our stay. TB

The Department of State has issued this Travel Alert to update security information for U.S. citizens traveling to and living in Mexico.  It supersedes the Travel Alert for Mexico dated August 20, 2009, and expires on August 20, 2010.

While millions of U.S. citizens safely visit Mexico each year (including tens of thousands who cross the land border every day for study, tourism or business and nearly one million U.S. citizens who live in Mexico), violence in the country has increased.  It is imperative that U.S. citizens understand the risks in Mexico, how best to avoid dangerous situations, and whom to contact if one becomes a crime victim.  Common-sense precautions such as visiting only legitimate business and tourist areas during daylight hours, and avoiding areas where prostitution and drug dealing might occur, can help ensure that travel to Mexico is safe and enjoyable.
Recent violent attacks have caused the U.S. Embassy to urge U.S. citizens to delay unnecessary travel to parts of Michoacán, Durango, Coahuila and Chihuahua (see details below), and to advise U.S. citizens residing or traveling in those areas to exercise extreme caution.  Drug cartels and associated criminal elements have retaliated violently against individuals who speak out against them or whom they otherwise view as a threat to their organization. These attacks include the abduction and murder of two resident U.S. citizens in Chihuahua.