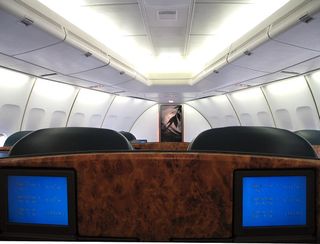 More and more airlines are removing first class seats.  Just as many resort hotels have removed the world "resort" from their name.  It looks better on an expesess account.  "..hey boss I didn't fly in first, I flew business class." TB

Qantas is adding capacity in its Boeing 747 and Airbus A380 fleet, but is doing so by reducing its first class seats -- becoming the latest carrier to admit that its much harder to make first class pay off these days.

By replacing first class sections with business class seats in nine of its 747s and almost half its A380s, the carrier estimates it is adding the equivalent capacity of three 747s. 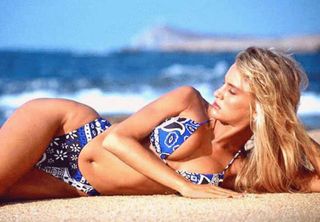 The swimsuit models may have left these locations but the destinations still look nice! TB

We can't all look like a swimsuit model, but that doesn't mean we can't travel like one. Diane Smith, editor of Sports Illustrated's swimsuit issue (on newsstands now), shares with USA TODAY's Rebecca Heslin great locations from current and past issues to strut your stuff.

It’s no secret that, for many travelers, the most dreaded part of any trip involves the airport. Typically, these sprawling facilities are spread across large areas, enabling them to handle modern commercial aircraft operations. Each year, tens of millions of passengers travel through these busy hubs, forced into long lines for tickets, baggage services and security checks—only to wait several hours for a flight.

Below is info from the American Arlines website.  Everytime you turn around they have their hand out. TB

For tickets purchased February 22, 2010, or later, the standby policy will change for American Airlines, American Eagle and AmericanConnection for travel within and between the U.S., Puerto Rico, the U.S. Virgin Islands, the Caribbean or Canada. Only premium customers will retain the ability to standby for earlier or later same-day flights. Any customers who want to secure a Confirmed Flight Change, regardless of their elite status, will have an option to pay $50 to guarantee a seat on an earlier or later same-day flight when available.

Here are some examples of travelers who have the option to standby at no charge:

Below are most of the major newspapers that still publish a Sunday Travel Section and have original, not wire service feature travel stories.  I've selected one of the more interesting stories from each of these Sunday sections.  Did I miss one you think is worth following? Let me know.

New York Times: A Dutch Town That Nurtures Its Quirks

LA Times: West Virginia: Peek into the Trans-Allegheny Lunatic Asylum if you dare

Miami Herald: Away from the beaches lies a different side of Florida -- and it's quite a hike

Sacramento Bee: Beyond the World Cup: Must-dos in Cape Town

Baltimore Sun: Virginia: Tours tell story of Monticello through voices of its slaves 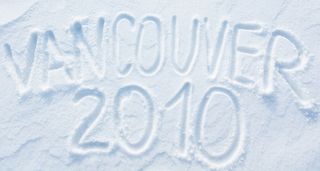 You may have watched it on TV now you can do it for yourself... I'll just watch. TB

Over the years I have signed plenty of liability waivers before doing thrill-seeking adventures such as bungee jumping, dog sledding and rock climbing, but I have never had somebody explicitly tell me that I will get injured. Not just a chance of injury here, but a promise of at least some bumps and bruises.

Spending the Night in an Airport & No Luggage for 2 Days

Arriving on-time would normally be a pretty good result on a cross country airline flight, but to discover the airport you have arrived at, Atalanta, has just had 3 inches of snow can be a disappointment.

At an airport like Atlanta, ATL, that much snow shuts the place down.  Almost every departing flight was canceled due to problems de-icing the planes before they would leave.  Add sub-freezing temperatures and the roads surrounding the airport quickly became impassable and accident ridden.  I had a hotel voucher given to me by Delta but the hotel shuttles couldn't make it to the airport for pickups.

So here are some tips I picked up from this adventure.  If you have any suggestions let me know and I will add them. Contact Me.


Below you can see that at 11am my plane still had plenty of ice on it.  By this time the Atlanta airport crews had the deicing routine running smoothly. 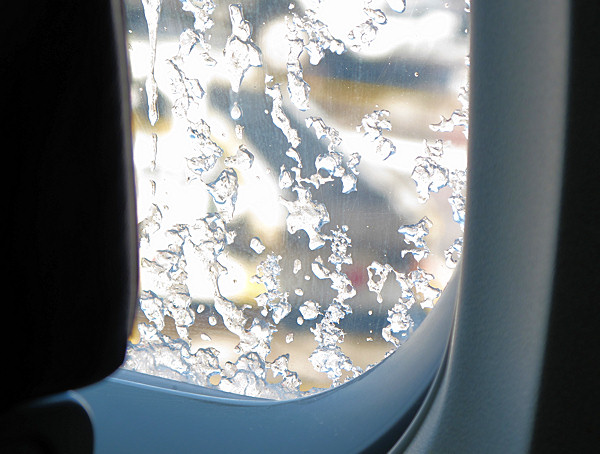 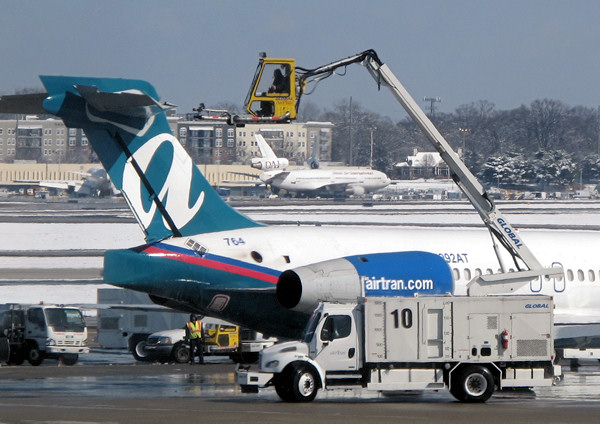 As for my luggage, I don't think it was ever really "lost".  My flight into Atlanta had been preceded by several days of bad weather on the East Coast.  Several airports were forced to close and I suspect luggage was delayed everywhere.  When I finally made it to my destination, New Orleans, the plane was loaded with luggage.  At the carousel lots of bags came off but only a few were claimed.  I would estimate that 70% of the luggage was not claimed.  It must have been from passengers who had arrived on earlier flights.  But that left lots of arriving passengers without bags.

After giving my info to the Delta staffer I headed off to my hotel.  I used both the phone and the Delta website to check on the status of my bag.  It looked like it arrived in New Orleans Sunday morning, but I do know that due to Mardi Gras parade street closures around the JW Marriott the delivery service couldn't easily get to my hotel.  Someone must have walked it in at least 5-6 blocks because it arrived Sunday evening.  So I spent all day Friday, Saturday, and Sunday without luggage.  Thank goodness my tux arrived before the Monday ball.  I had spent $42 to rent it. 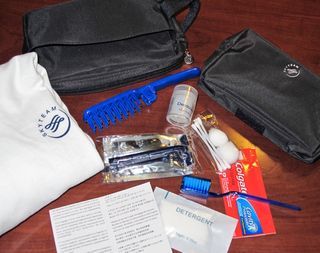 Here is a photo of the Delta Overnight Kit that I was given with my hotel voucher.  It contained: One Xtra Large T-shirt, hair brush, stick deodorant, q-tips, cotton balls, disposable shaver with cream, toothbrush, toothpaste, detergent.  And a card from Delta that said: "We regret that your baggage was not available on arrival. You may rest assured that we are doing everything possible to return it to you.  We apologize for this inconvenience and thank you for your understanding."  All photos copyright The Travel Blogger.

Posted at 11:54 AM in Airlines, Travel Tips | Permalink 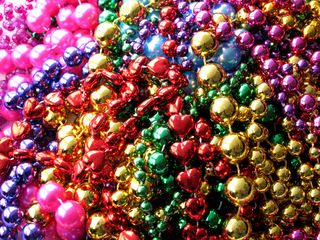 Mardi Gras parades take different routes through the city of New Orleans but most of the big parades travel a "uptown" route that takes them across the city and to the edge of the French Quarter, Canal Street.  Do an internet search for "mardi gras parade routes" make sure the map is for your year.

In the video below you see the Krewe Of Tucks parade moving down Canal Street.  Here the public is kept back from the parade with police barricades as the float riders toss "throws".  On other streets you can walk right up to the edge of the floats and beg for beads, cups, stuffed animals and doubloons.  The theme of this parade was TUCKS FACES REALITY, each float spoofed reality TV.  Here is the Jimmy Kimmel Live and the Biggest Loser floats.


Additional Parade Videos can be found on my Vimeo site.

Some of the best catches are of items imprinted with the name of the parades Krewe, or organizers.  Several krewes tossed 3-4 foot spears into the crowd.  Most were wooden, I guess liability isn't an issue. Orpheus tossed soft fabric spears.  I also caught a rubber ducky on a necklace. 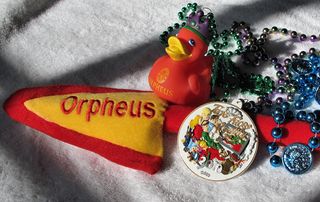 This is one of my favorites, a Tucks Faces Reality 2010 medal showing a family sitting around their TV set. 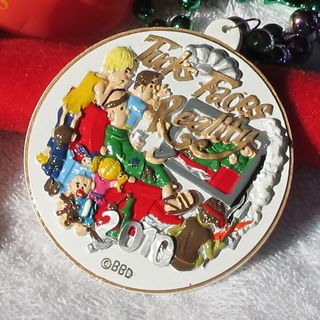 Beads, Beads, Beads!  "Toss Me Somethin' Mister" is the normal plea that parade watchers shout to get the attention of the bead tossers on the floats.  This year it was different, it was the Superbowl winning New Orleans Saints chant, "WHO DAT". 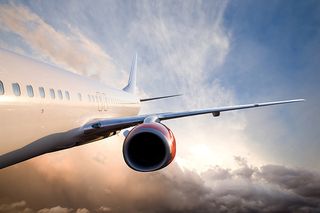 GENEVA (Reuters) - Air travel recorded its second safest year in 2009, with one accident for every 1.4 million flights made in Western-built jets compared with one per 1.2 million in 2008, the industry association IATA said on Thursday.

Last year's global accident rate equated to 0.71 aircraft hulls lost per million flights, an improvement on the 0.81 in 2008, but short of the 2006 record of 0.65, the International Air Transport Association said in a report. 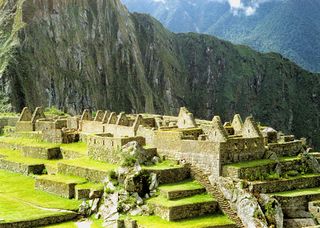 Heavy rain in January unleashed mudslides that cut off roads and blocked a rail line between Machu Picchu and the nearby city of Cusco.

Previous Next
The Travel Blogger posts items he thinks you will be interested in. If the post is sponsored or is an advertisement it will be clearly indicated.