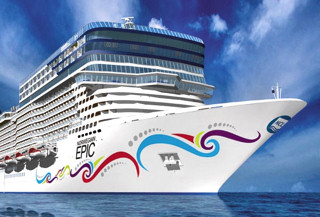 We already know that Norwegian Epic-- one of the year's most hotly anticipated new ships, Norwegian Cruise Line's biggest ever -- will usher in new innovations in entertainment and dining when it launches in July. Now, the cruise line has announced the ship will also debut the largest spa and fitness facility at sea, measuring more than 31,000 square feet.