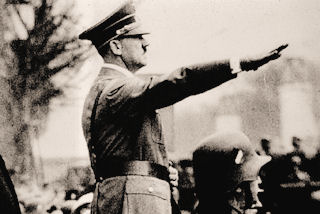 An unidentified 30-year-old Canadian tourist was arrested over the weekend in Berlin for giving the Nazi salute while a friend photographed him. The pair were outside the historic Reichstag parliament building, when police arrested the man and confiscated the memory card from his companion's camera, according to news reports

Posted at 06:40 AM in Destinations, News, Photography | Permalink