W Hotels International has opened the W Paris - Opera, called that due to its close proximity to the famous Paris Opera House, the Opéra Garnier.  It is also right around the corner from one of my personal favorite shopping spots in Paris, the Galeries Lafayette.

But don't pick a hotel in Paris based just on two cool nearby destinations, most important is how far your hotel is from a Paris Metro station.  And the new W Paris - Opera has several stations nearby, one of which is the Opera station which connects three major Metro subway lines and one RATP train.

Visit the W Paris - Opera Website.  For and excellent private tour of the Opera House or any other part of the city contact Paris Angels.  Check out my video from 30 Days In Paris; Day 27, Paris Opera House.  Below is the famous dome inside the Galeries Lafayett. 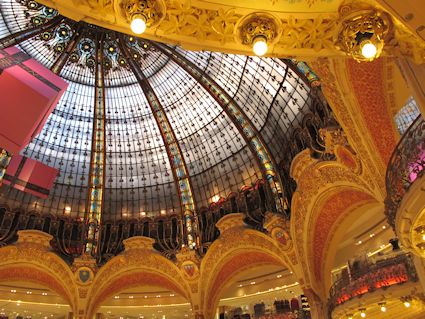